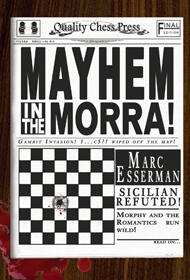 I forordet til bogen skriver GM Larry Christiansen:
"In 2011, when preparing for the US Championship, I decided to employ the Morra Gambit as a surprise weapon if given the chance. Marc supplied me with a vast amount of analysis and novelties for that tournament and I became convinced that the gambit was not only dangerous, but perfectly sound. There is no greater authority in the world on this line than Marc Esserman and he lays it all out there in this book."

"The Morra Gambit has languished and has frequently been derided by strong players. Indeed, you can find some of these quotes between chapters in the excellent, inspiring book Mayhem in the Morra by Marc Esserman, that casts the opening in a totally new light."

"A quick glance at the cover and you just know that Mayhem in the Morra is going to be lots of fun. And it proves to be so... The imaginative Marc Esserman actually has a real talent for writing."

"Rarely has one person had so much influence on reviving a variation long thought to be dead. Esserman has advocated the Smith-Morra for many years as a player and now he does so as a writer and theoretician...

Mayhem in the Morra is useful not only for the many new ideas and theoretical novelties it offers but also for the strategic explanations. Esserman believes the Morra is not just about cheap tricks but has a deep positional underpinning. He does an excellent job of explaining the intricacies of this opening that goes well beyond just presenting the state of theory as he sees it."

"While the Morra doesn't refute the Sicilian, as the cover of the book cheekily suggests, it will definitely make Black's life difficult; especially if he doesn't enjoy defending complicated and passive positions. I love everything about the present book: the passion, the enthusiasm, the original input, the writing, and the many entertaining games and variations. It is a true labor of love and I heartily recommend it to anyone who wants to sharpen their game against the Sicilian or perhaps just have a truly fascinating alternative to the mountain of theory in the conventional main lines of the Sicilian Defense."

"Mayhem in the Morra! is one of the best and funniest opening books I’ve ever read, and there’s hardly anything to criticize. Even his sometimes revengeful-sounding style is usually compensated by realistic goals, such as when he acknowledges the strength of the 'Improved Siberian' move order for Black (1.e4 c5 2.d4 cxd4 3.c3 dxc3 4.Nxc3 e6 5.Nf3 Nc6 6.Bc4 Nf6!), commenting that in this line 'the battle rages fierce' still.

Esserman’s book is an outstanding example of out-of-the-box thinking, profound enthusiasm for a subject and a lot of hard, hard work. It’s hilarious as well as ambitious; arrogant as well as amiable. It describes how an opening can make you sad and happy at the same time, depending on the way it is treated and how it treats you.

Marc Esserman has written a celebration of chess in all its imaginative richness. You should read it, even – no, especially if you’ve always hated the Morra Gambit."

"The reason why we say 'Mayhem' is an impressive work is that it contains a strategic explanation of the Morra, not just an automaton's repetition of the variations. Esserman explains the opening in terms of domination of squares and pursuit of pieces, especially the king and queen, an approach that the computers strangely are unable to express...

Because of his energetic style, we would call him a Balzac of chess writers and we grant him high marks."

"IM Marc Esserman's brilliant Mayhem in the Morra arrived in the mail this weekend and has not been out of my hands very much since. Not only is it chock full of interesting ideas and original games in the Smith-Morra Gambit (1.e4 c5 2.d4 cxd4 3.c3), but it is also a fun book to read! In fact, I find it hard to remember the last opening book that was as entertaining to read as Mayhem in the Morra, which has an inspired and amusing style -- overflowing with personal anecdotes, quotes from James Bond and Austin Powers films, and incitements to romantic violence at the chessboard."

"The reputation of the Morra Gambit is like that of April weather, neither wholly bad nor really good. Esserman has set out to improve the reputation of the gambit, and he does so with diligence, enthusiasm, facts and a certain degree of Sense of Mission."