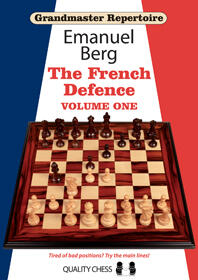 "Chess is so deep that you can dig so deep into an opening variation that you feel close to the other side... Swedish (honorary Norwegian) grandmaster Emanuel Berg have done just this with the Winawer variation in the French Defence. In a two-volume work, Emanuel has performed a piece of research worthy of a doctorate on these rich lines.

This is a book on World Championship level; but also brilliant for the ordinary club player fascinated with chess openings and the aesthetic aspects of chess."

"It's a nice mix of delving deep into the well-known and dabbling with dynamic deviations. In both cases he seems to have found so many novel moves and ideas. Open the book at random and novelties just leap out of the page!"

"Berg consistently selects aggressive continuations for Black. One is his advocacy of the challenging 4...Nc6 after 4.Ne2 meeting 5.a3 with 5...Ba5. This is much more ambitious than 4...dxe4 and receives 40 pages. Another is the choice of meeting 5.Bd2 with 5...Nh6 which merits another 35 pages. Both chapters feature a wealth of original analysis.

Main-line Winawer enthusiasts will find THE FRENCH DEFENSE: VOLUME ONE compelling reading and a must buy."

"Throughout the book you’ll find hundreds of novelties, verbal explanations and suggestions to forge your own repertoire. I must admit that some recommendations are not for the faint-hearted and that one needs self-confidence to constantly fight for the initiative in order to survive. But the lines recommended are still very entertaining and fun to play.

Conclusion: I’m impressed. This book combines a world-class approach to the French, with a Starting-Out guide that introduces the opening to those of you who never touched the French. From the very first chapter, this book builds your understanding not only of the opening itself but also of the unique structure arising after 5.a3 Bxc3+ 6.bxc3. I’m sure that once all three volumes are finished, the long-term reign of “Play the French” by John Watson will come to an end. A new era of the French may lie just two volumes ahead."

"The first two volumes of Emanuel Berg's trilogy on the French Defence offer a repertoire against White's best move, namely 3 Nc3. Nothing else tests Black's skill as much as this classical developing move. On the other hand, nothing else offers Black as much as fun and adventure either; it represents a true challenge for players on both sides of the board, especially if Black selects the Winawer Variation (3 ...Bb4) as recommended here by Berg...

The depth of both books is impressive and there is a fine blend of explanatory prose and variations."

"The Swedish GM offers good explanations in many places. Some of the sub-variations are analysed too deeply with engines for my taste. But as I say, this is perhaps a matter of taste. In any case, the book makes you look forward to the following volumes."

"I see the book as a kind of guide, a source of ideas and a compass, to allow a player to avoid suffering a shipwreck...

Those who work with this book will certainly profit from it."