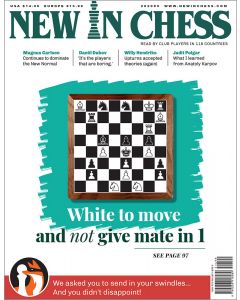 Organizers of summer tournaments long for the moment when they can welcome their guests in person again.

A fully operational chess set of 9 by 9 millimetres, chess in space and playwrights and pop musicians who keep remembering Kasparov vs. Deep Blue.

Magnus Carlsen has now won two of the first three legs of the Tour that carries his name, as he was on the rampage again in the Chessable Masters.

We asked you to send in your own swindles and the response was overwhelming.

38 Carlsen also excels in the clutch

The Saint Louis Chess Club resumed their activities online with the Clutch Chess International. A record $265,000 prize-fund attracted a field of world stars and the best American players. Guess who won?

Irina Krush drew strength from chess as she battled Covid-19. Ennio Morricone liked to dream that he was a chess great from the past.

Willy Hendriks, the author of On the Origin of Good Moves, questions the conventional history of ideas in chess and pleads for an evolutionary perspective.

In a frank interview the Muscovite looks back on his win in the Lindores Abbey Masters and vents his views on today’s top grandmasters and his childhood heroes. ‘There’s nothing wrong with chess. It’s the players that are boring.’

75 They are The Champions

Temor Kuybokarov is the national champion of Australia.

Invigorating your bishops at the cost of a pawn is often a good investment.

Judit Polgar looks at what she learned from the 12th World Champion during the many games they played and the many hours they trained together.

Our book reviewer tells you why the games and stories of George Mackenzie, Arthur Towle Marriott, Ivan Bukavshin and Stuart Rachels (5 stars!) are of interest to you.

Jan Timman found plenty to enjoy in a new book by study composer Werner Keym. Including the intriguing problem that graces our cover.

Which three people would Nikita Vitiugov like to invite to dinner?