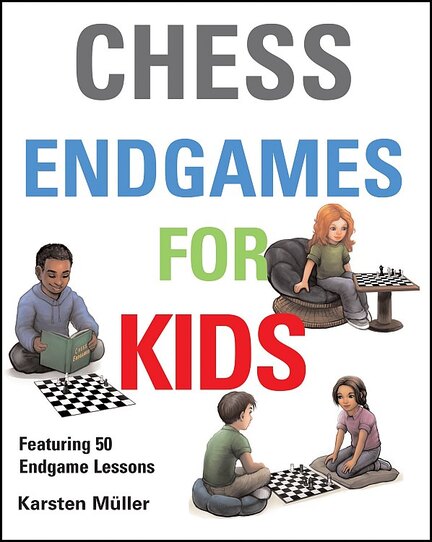 “The 50 mini-chess lessons featured in Chess Endgame For Kids are a fountain of rich, chess knowledge and tips to play winning endgames. Karsten is the consummate, virtual mentor. With young, eager chess players in mind, he patiently, and enthusiastically explains the essence of each endgame. Not too much and not too little – just the absolute must-know, practical endgame ideas and the underlying logic of each position” – Michael Ciamarra, AL.COM

“This attractively produced hardback covers the endgame in 50 lessons arranged by level of difficulty (basic mates are presented early but B+N is not covered until near the end). Chess Endgames for Kids presents fundamental endgame knowledge but not in a way that overwhelms the reader... valuable not only for kids, but also chess teachers and adults who are tired of starting (and never finishing) massive tomes on endgame theory” – IM John Donaldson

“No-one has explained the ‘W-manoeuvre’ so clearly before, and I had a lot of fun with it! My impression is that Karsten MÃ¼ller has completely fulfilled his aims. His zeal for the endgame shines through, even with a modest number of pages...â€ – Raymund Stolze, CHESS INTERNATIONAL DE

“On your way to excellence in chess this book will be both a constant guide and a place to return to. The title refers to kids ... but adults will also get valuable input, to easily understand the complex world of chess endgames” – SCHATTENBLICK

“The author is the phenomenal grandmaster Karsten Müller, who is considered to be the best endgame expert in the world. His masterwork Fundamental Chess Endgames, co-authored with Frank Lamprecht, belongs to the best-ever written endgame books – some say this work is responsible for the outstanding endgame skills of World Champion Magnus Carlsen, who has studied this book in great depth” – John Elburg, chessbooks.nl

“Useful for both young kids and old kids like me!” – Matthew Sadler, NEW IN CHESS

“Excellent for players with some experience who need to learn key theoretical endings, and it’s a steal at $16.95 in hardcover” – John Hartman, USCHESS.ORG